On the Milliken v. Bradley Anniversary

Last week marked the 46th anniversary of the decision in the Milliken v.Bradley Supreme Court Case. While most folks are familiar with Brown v. Board, Milliken is often overlooked despite playing a pivotal role in halting our country’s move towards desegregation.

If you aren’t familiar with the case, check out this episode of the Integrated Schools Podcast. Courtney and Andrew recorded it last year with Michelle Adams, who gives a fascinating constitutional law primer and explains why Milliken is such an important case for understanding where we are today. We re-released it last week with a new intro and outro, and it is as relevant today as it was a year ago. We hope everyone has a chance to listen.

We also had the opportunity to participate in a fantastic twitter conversation tonight, alongside the National Coalition on School Diversity and Learn Together Live Together. You can find the conversation by heading to the hashtag #ThurgoodWasRight. 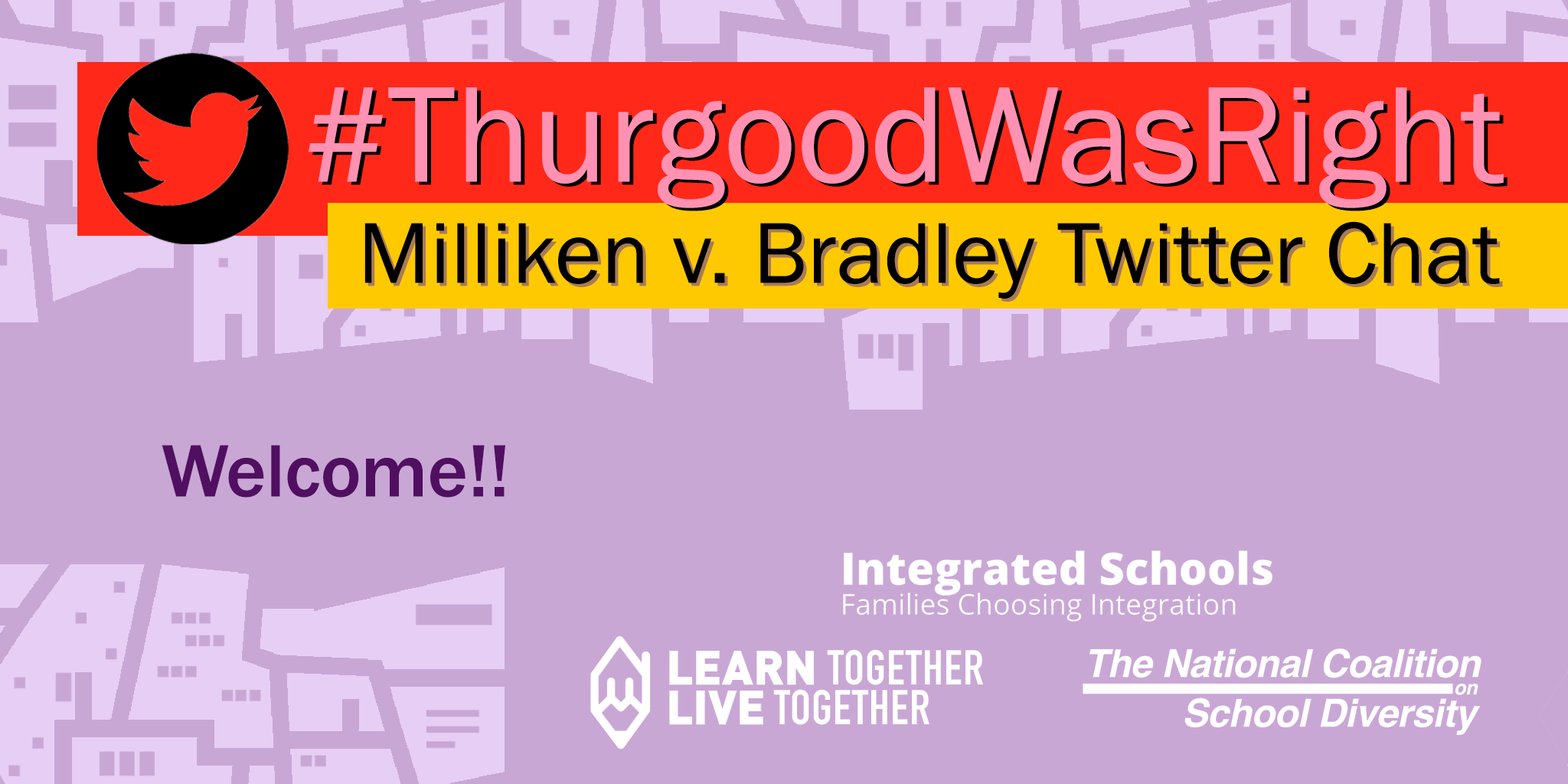 If you are neither a podcast listener, nor a twitterer, here is a sample of some of the transcript from that interview with Michelle Adams. (All our recent podcast episodes are transcribed and available for you to read here! – we’re working on the back catalog as fast as we can.)

Andrew Lefkowits: The system that continues to incentivize segregation seems really crucial for people to understand. I mean it ties into this idea that the sort of natural state of things is segregation and that, the whole idea of de facto segregation, like there just happens to be segregation. But there doesn’t really–segregation requires intentional work by people to maintain and systems and structures that are set up to reinforce it, for it to continue on.

Michelle Adams: Well, I agree with that 100% but I would also add that it’s not just that, segregation is actually inefficient and expensive. It’s, you know, it’s economically irrational.

What I want to do also is shift the burden. For many years I was running around talking about integration and what have you, people would always say, well, integration, it didn’t work. And what would be interesting to me was that all of the burden would be on the pro-integration people to prove that it would work. And actually, I think, and this is my offering to you guys in the work that you do – The burden is not on you, the burden is on the segregationists. You guys are doing the right thing. I think the burden should be on people who basically say to themselves, hey, I really want to have my kids go to school with 100% White kids who are upper middle class, like, I think that’s a great educational environment. They need to explain why that is.

Andrew Lefkowits: No. I feel pretty confident saying that. That’s what it feels like is at stake to me. I mean, the reason that I care about these things is that it’s not some on the periphery, kind of…it does really feel fundamental to the future of our country, that there is not a path forward that doesn’t involve finding a way to come together.

On COVID-19 and Micro-schooling, Pods, and more

Integrated Schools is growing a grassroots movement of, by and for parents who are intentionally, joyfully and humbly enrolling their children in integrating schools. Learn more >